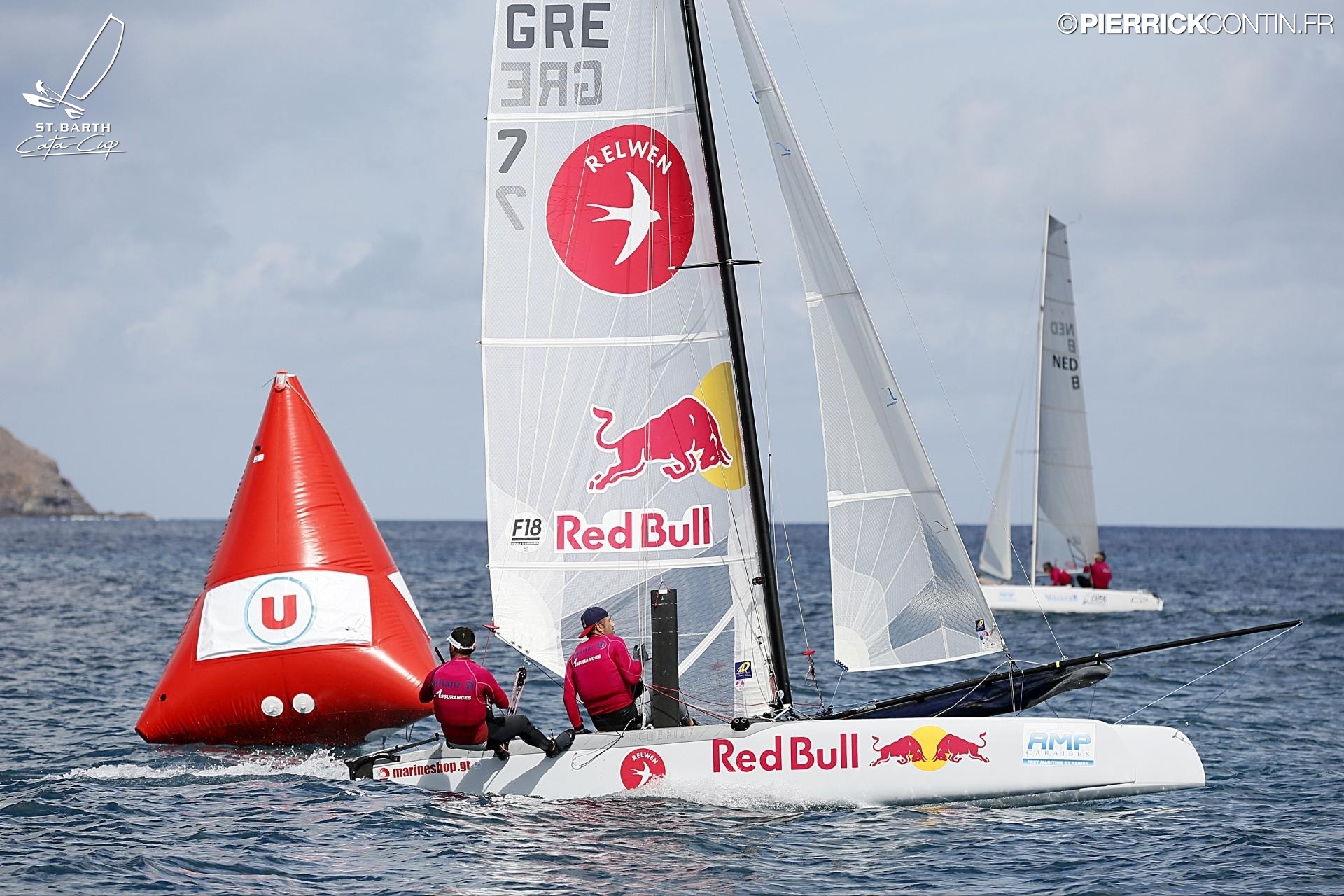 What a surprise at the podium of the St Barth Cata Cup this year with teams from Greece, Argentinia and Belgium on the podium! The fourth and last day can be identified as a day with an unlikely scenario where everything was possible again. At the start of the day it was more than likely that Franck Cammas and Matthieu Vandame (Team ODP 1) would be the winners, or at least on the pdium based on their achievements the previous days. But a DSQ killed their ambitions and the Greek duo Iordanis Paschalidis and Konstantinos Trigkonis were back in business. These two sailors were in front during the whole event with remarkably steady performance in highly variable wind conditions. At the end of the day they finished with a 7 points lead of the Argentineans Cruz Gonzales Smith & Mariano Heuser (Team Eden Rock Villa Rental) and Belgians Patrick Demesmaeker & Olivier Gagliani (Team Les Perles de Saint-Barth) and also they have been added to the Hall of Fame!

On the final day there was already some high-pressure due to the very small differences in points between the leaders at the start day. Then the race committee decided to make it an extra special course to make this tour of the island a race that was the equivalent of two races and could not be removed from the overall ratings. “In this context, it was win all or lose all,” declared Franck Cammas before going out on the water on Sunday morning. This helmsman was right on in his prediction. In this race perfectly controlled by his major Greek opponents, Cammas made a big mistake by missing a marker just before Pain de Sucre in the last third of the race. At the finish line there was no ambiguity. The jury had discussed and decided to disqualify Cammas as well as two other boats. This was a tough one for the winner of the 2013 Cata Cup edition who, as a result, not only lost his first place but because of a total of 96 points ended in 13th place overall. “Sometimes you need some luck and…. rules are rules. Of course this was an unusual end to the race, but it worked out for us. I think Franck and Matthieu did sail better than we did this week, as we made a fair amount of errors and that cost us valuable points that we could and should have avoided”, commens Iordanis Paschalidis, happy with a victory that had eluded him until now. “I had participated in St. Barth Cata-Cup twice with my friend Gustaf Dyrssen and both times, we just missed the podium. This year with my regular F18 teammate, I definitely had an eye on first place. Today, we reached our goal and I’m extremely happy. It was a great pleasure to face sailors like Franck Cammas and Patrick Demesmaeker, both incredible vice world champions for the class in the past (the first with Jérémie Lagarrigue in 2008 and the latter last summer with avec Gilles Tas. 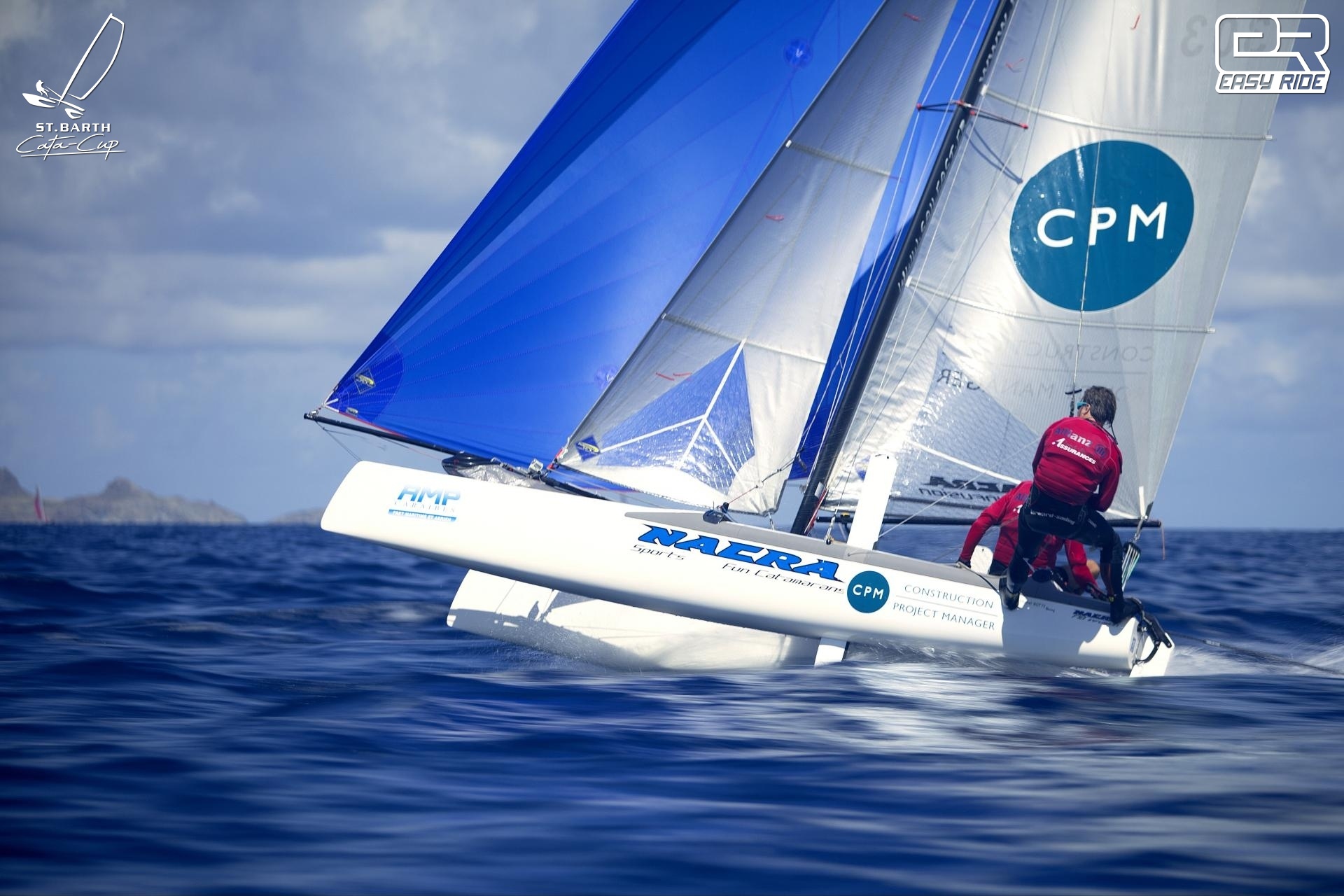 Hell for some, Heaven for others
“It was almost a perfect day and that feels good. On the other days, we didn’t succeed as much as we wanted and we got good starts but then lost places and finished in sixth or eighth place. Today, there was a little more wind (between 10 and 12 knots) and we were more comfortable, but we also let our hair down and sailed less conservatively than on the other days, and didn’t hesitate to take real risks,” notes helmsman Cruz Gonzales Smith (Team Eden Rock Villa Rental), who did not hesitate to take risks in the last run of the first race. “That certainly helped us win the around the island race, the most important leg of this St. Barth Cata-Cup in terms of points,” added the Argentinean, who won the Prix Marché U for the best day, and also moved up from eighth place to second place in the overall standings, head to head with Patrick Demesmaeker and Olivier Gagliani, winners of the 2015 edition.

“We regret having led the tour around the island for three-quarters of the race, then to be passed by pure speed…but that’s the way it is. At the end, it’s a podium for us again at the St. Barth Cata Cup. It’s an outcome we didn’t really expect with this high level competitors. The Greeks were very fast and the Argentinians proved their knowledge of the race courses. We have the satisfaction on Frirday winning both races that day, for us that will always be a great souvenir. What I will also remember from this 10th St. Barth Cata-Cup is obviously the great ambiance, the impeccable organization, and the good nature of Nono (Gustave-Honoré Lavali, the president of the race committee. Up to the next edition!” concludes Olivier Gagliani.

Penny Wyon, teammate for Le Journal de Saint-Barth (1th mixed team, 15 th overall): “We are very happy. Yet it wasn’t easy. We had a bit of an issue the first days of the race as we had a hole in the boat. As a result at the end of each race, we finished with 10 liters of water in one of the hulls. That was quite a handicap. Luckily this morning we were able to fix the problem and of course we did much better. We finished 12th in the tour around the island today. We had a great time! We had already raced in the St. Barth Cata-Cup twice before and it was superb, but this time was really perfect…. Perfect paradise!”

Turenne Laplace, helmsman for West Indies Sails (1th Saint-Barth team, 11 th overall): “The result of this St. Barth Cata-Cup is very positive for use. We didn’t expect to finish so high in the standings so we are very happy. We raced in conditions we prefer and we think we sailed a knot faster this year  because we were almost always in the front group. We sailed well and were able to manage the boat very well. Today, we made two mistakes that cost us quite a bit so we could have finished better overall. That was especially the case in the race this afternoon. We had a great start and if we weren’t forced on a starboard tack, we could have sailed faster and finished top three.”

Éric Bézon, helmsman for Nord Elektron (21th overall): “The day was simply terrific with the tour around the island sailing with enough wind. We finished well, so we are happy. This afternoon was a little more unusual but the entire week was really magic. This was our sixth participation in the St. Barth Cata-Cup and we still love it. There were incredible racers, great action, real battles… absolutely everything we came to find here!”