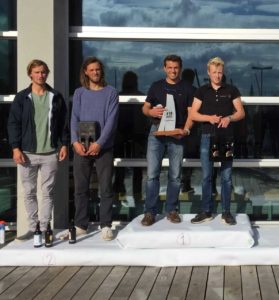 During the weekend, the Open Danish Nationals was held, in connection with the Aarhus Festuge Cup. It was held at the new Aarhus International Sailing Center where the Sailing World Champions where held last month. It became a multi-national prize podium: First place went to Germany, Sven Lindstädt and Jesse Lindstädt, on second place and hence best Danish team was the brothers Daniel and Nicolai Bjørnholdt (Hobie 16 World Champion and European Champion) and third place went to Swedes Leo Alsved and Anders Almgren!

It was close to being two Danish teams on the podium as there was only 1 point difference to 4th place, which went to the Danish team Jan Hedmann Jensen and DEN F18 Chair Penny Wyon, who also were best Mix team.

There were 18 enrolled teams for this year’s Open Danish Nationals, of which 10 were Danish teams. The regatta was, as usual, frequented by German and Swedish participants supporting a small nation with a relatively small fleet – much appreciated by the Danish Formula 18 association.

It’s always a difficult decision for a Race Officer when the wind conditions are extreme, whether to cancel or complete races, when you want to complete a minimum number of races – and the Race Officer was challenged this weekend.

Saturday started with wind forces measured above 16 m /s (30knots), so even the Race Committee boat had challenges staying in place. However, two races where started, however the second race had to be abandoned due to too much wind. Unfortunately, the day ended with unusually high material damages, such as 2 broken masts, 2 broken spi-booms, ripped sails and broken battens. Fortunately, no serious physical injuries. The evening was used to repair what was possible. Here there was taken great pleasure in using the large, beautiful hall in the new Aarhus Sail Center.

On Sunday , 5 races where completed. The first two in wind speeds up to 10m/s (20knots), there after two races with perfect wind conditions for Formula 18. Finally the wind dropped so that the final race was carried out in very light wind – though very shifty, the light wind was probably appreciated by the tired arms of the sailors.