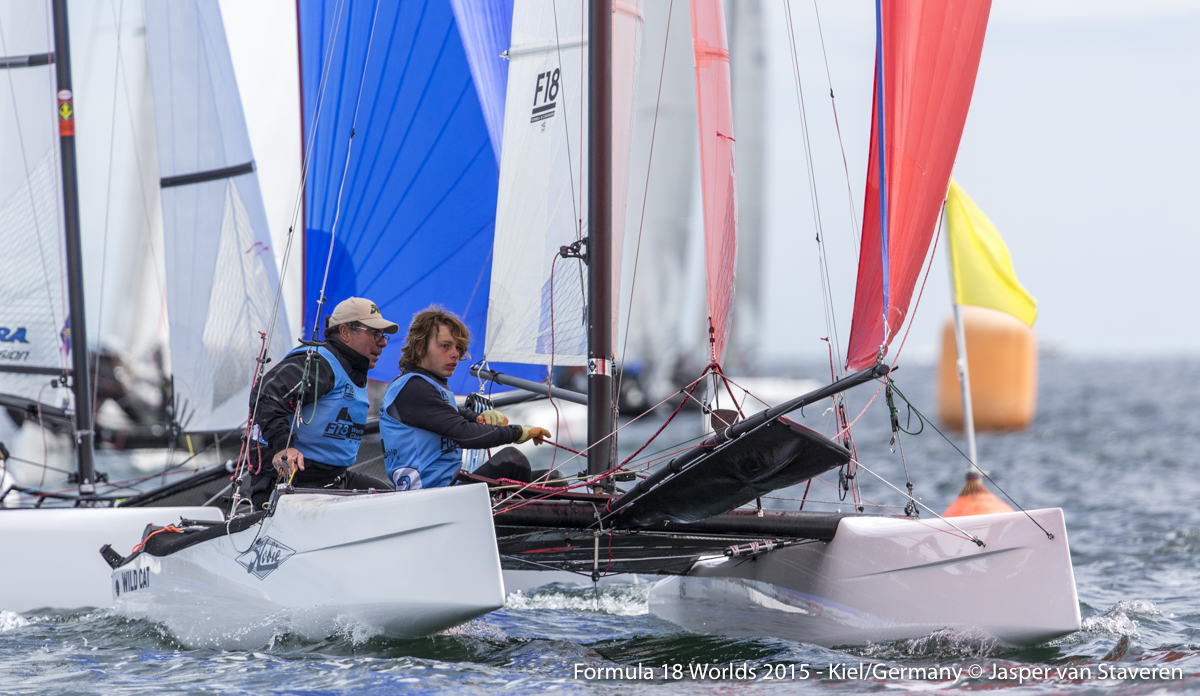 On Thursday it was all or nothing for several sailors. The last race of the qualification decided if they were in the Gold or Silver fleet. The jury had a long evening handling all protests from sailors who wanted to be in the Gold fleet. The only race that was sailed was surprising as well. Leaders Larsen/Van West finished in first position, but got a disqualification. Mitch Booth stayed calm, sailed a steady race and is now the overall leader. Larsen/Van West are second, Zeekant/Begemann are third. On Friday it will be spectaculair: races start with 4-5 beaufort and will build.

Maybe Thursday was the most difficult day so far at the Formula 18 Worlds. With a light breeze between 5 and 9 knots it was a big guess what side of the course to choose. In both yellow and blue fleet races had to start with the black flag. Over 30 BFDs (Black Flag Disqualification) were noticed and shuffled the overall result.

The Gold fleet is now a very competitive fleet. Mitch Booth, sailing with his 14 year old son Ruben, has equal points as Larsen/Van West who won the F18 Worlds in 2014. Zeekant/Begemann are in third and have a trackrecord as well winning the Round Texel overall in 2013 and were 2nd at the Worlds in 2012. These guys haven’t been sailing together for at least a year but show F18 sailing is just like riding a bike. The youth F18 champs 2014 Reiss/Whitehead are in fourth position followed by the other top dogs Ashby/Goodall.

Sailors dinner
Thursday a sailors dinner was held, sponsored by Hobie Cat, Dimension Polyant, Goodall, Nacra and Contender. On stage Mitch Booth and F18 president Olivier Bovyn commented the video coverage of that day. Also Patrick Demesmaeker and Lars Linders were on stage, especially talking about the Belgium youth sailing program and the Swedish team.
On Friday races are scheduled at 11:00 and can be tracked online thanks to the GPS-tracking on board. All results can be viewed here: http://manage2sail.com/en-US/event/cf4c17df-97ca-42f8-b24f-273f1c8fd232/#!/results?classId=020b3519-02c5-4e7c-adcb-354d59eb7ede